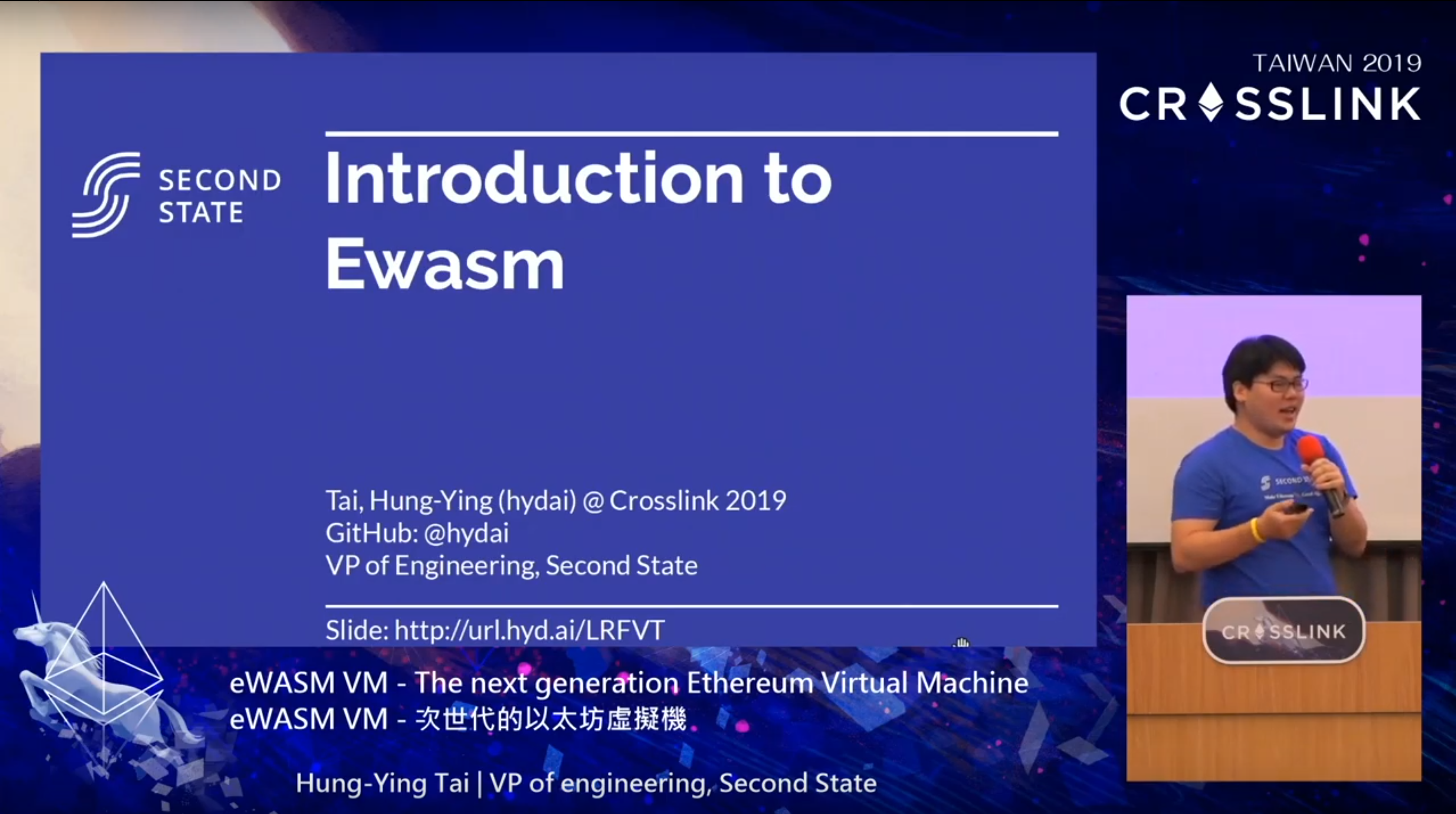 This is a wrap-up for Second State’s VP of Engineering, Mr. Hung-Ying Tai’s presentation on SOLL, Ewasm VM's current research content and future direction. The sharing is very exciting, including content on EVM bytecode, Webassembly, Ewasm1.0 and Ewasm2.0

When Ethereum's smart contract transaction is executed, for example, when transfer Token to another address, we read the EVM bytecode into the Ethereum virtual machine, and the EVM bytecode has the following characteristics:

Let's take a look at the features of Ewasm:

There are many high-level instructions in the EVM like SSLOAD and SHA3. These commands are in Ewasm 1.0. because WASM can dynamically read libraries (modules). Ethereum defines the Ethereum Environment Interface so that clients can use different languages. Corresponding to the library, and it is easier to complete the prototype and upgrade.

The following slide is a list of functions defined by the Ethereum Environment Interface. 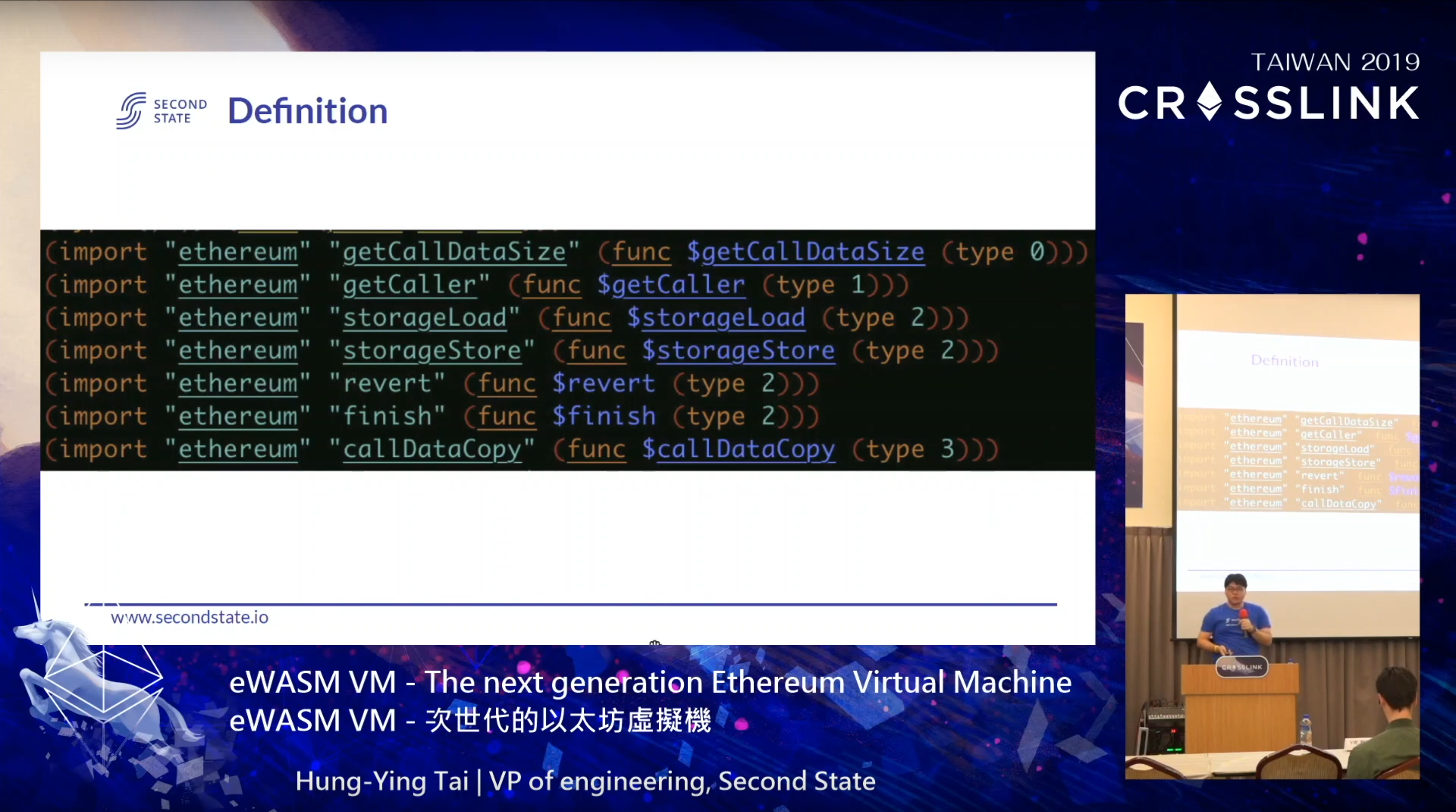 How to remove illegal instructions? 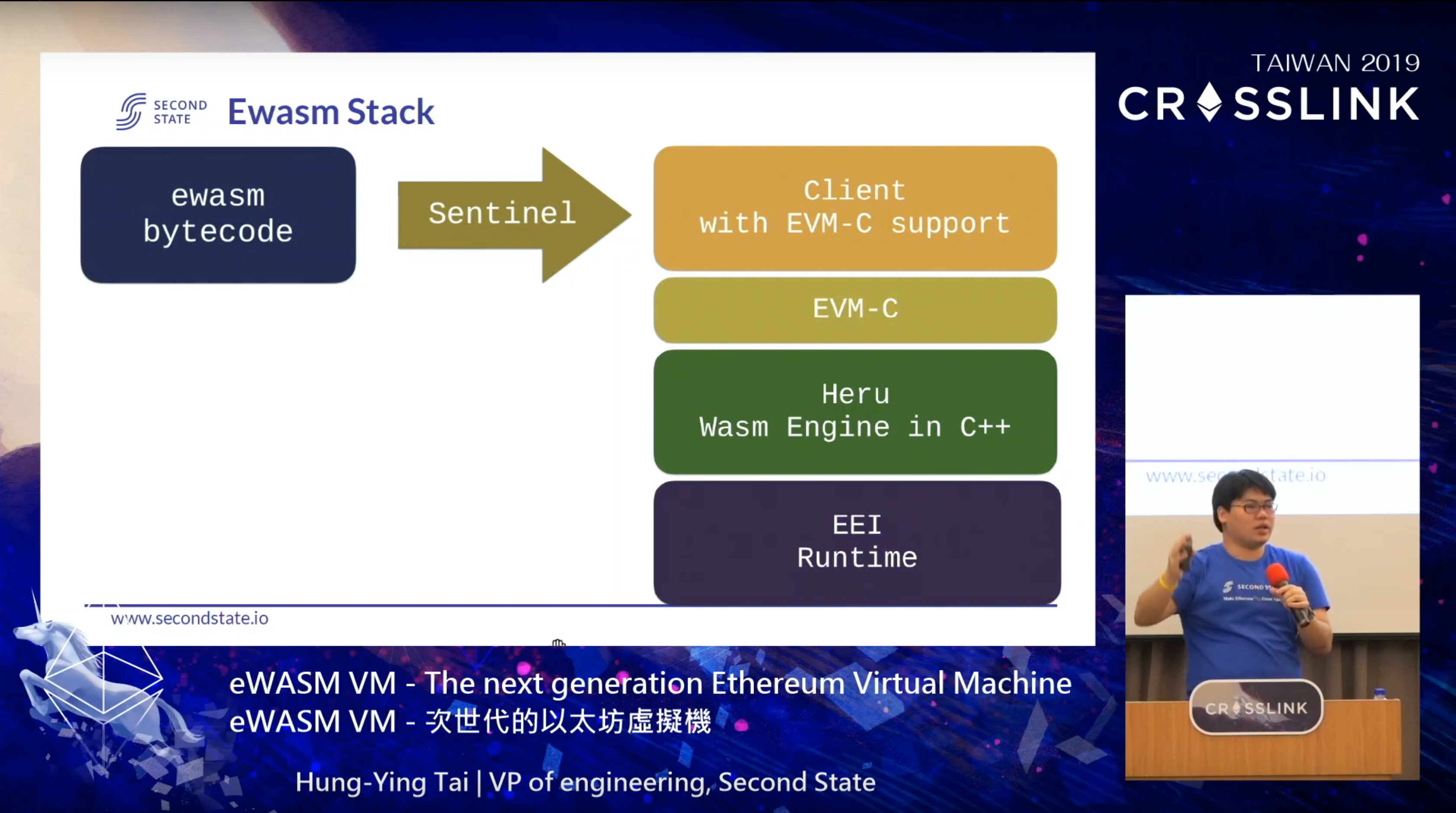 Does Ewasm perform better? The speaker shared the results of both EVM execution of Sha1 and BN128mul. It can be found that EVM is the faster when running BN128mul, mainly because WASM only supports 32/64-bit operations. For 256-bit it requires additional simulation (ONE 256 bit operations may be replaced by 25 64 bit operations). As EVM provides precompiles, Wasm engine can support bignum library to speed up.

The following slide shows the ERC20 Token compared to Ewasm 2.0 and Ewasm 1.0 storage. Ewasm 1.0 has a corresponding key for each data, while Ewasm 2.0 only has state root, so it can only interact with state root. 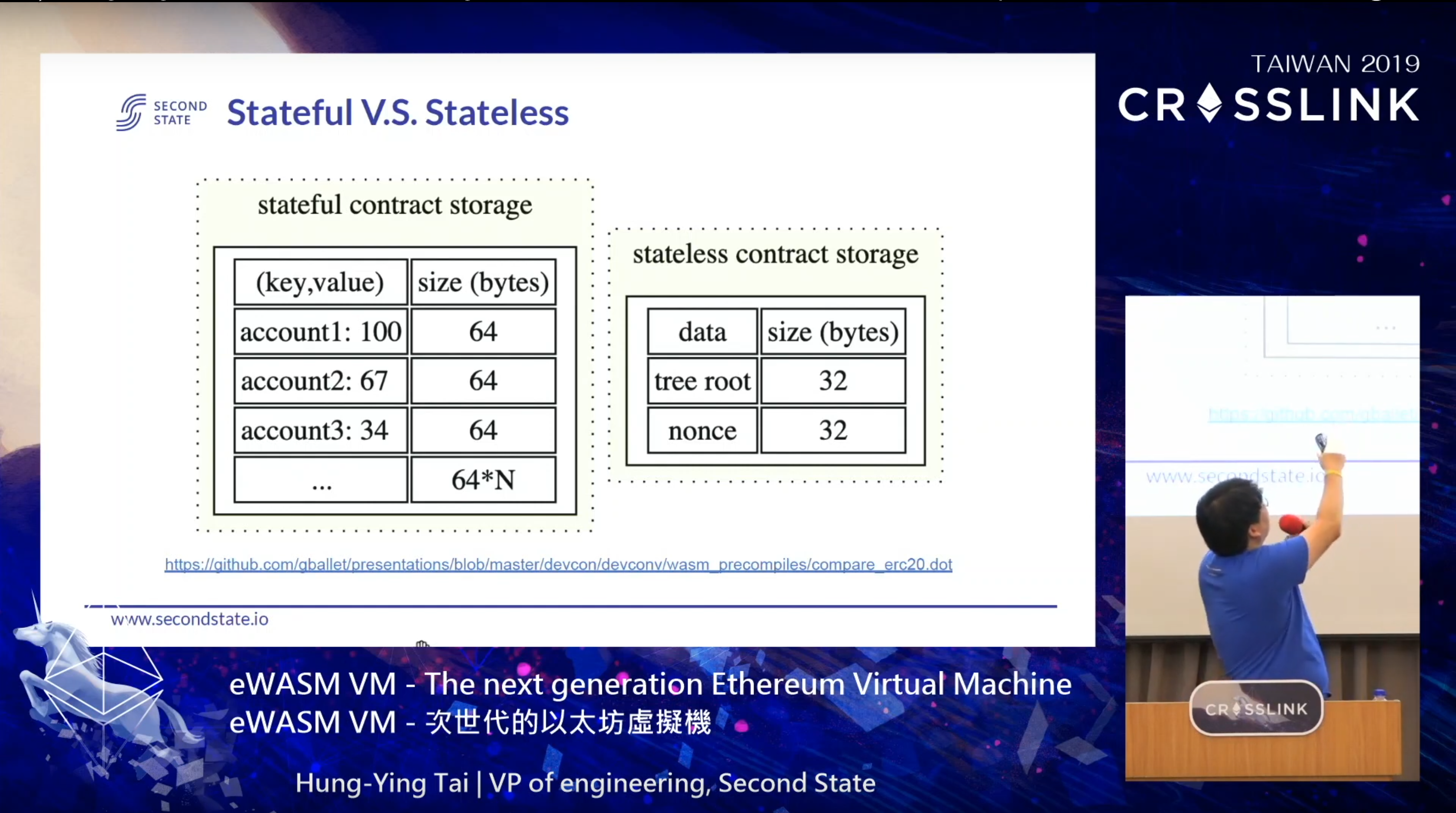 Phase One and Done

At the current stage of Ewasm 2.0 to phase one and done, there are also tested networks that can perform EE on shard blocks, and Ethereum also has open source Ewasm 2.0 test tool: Scout. 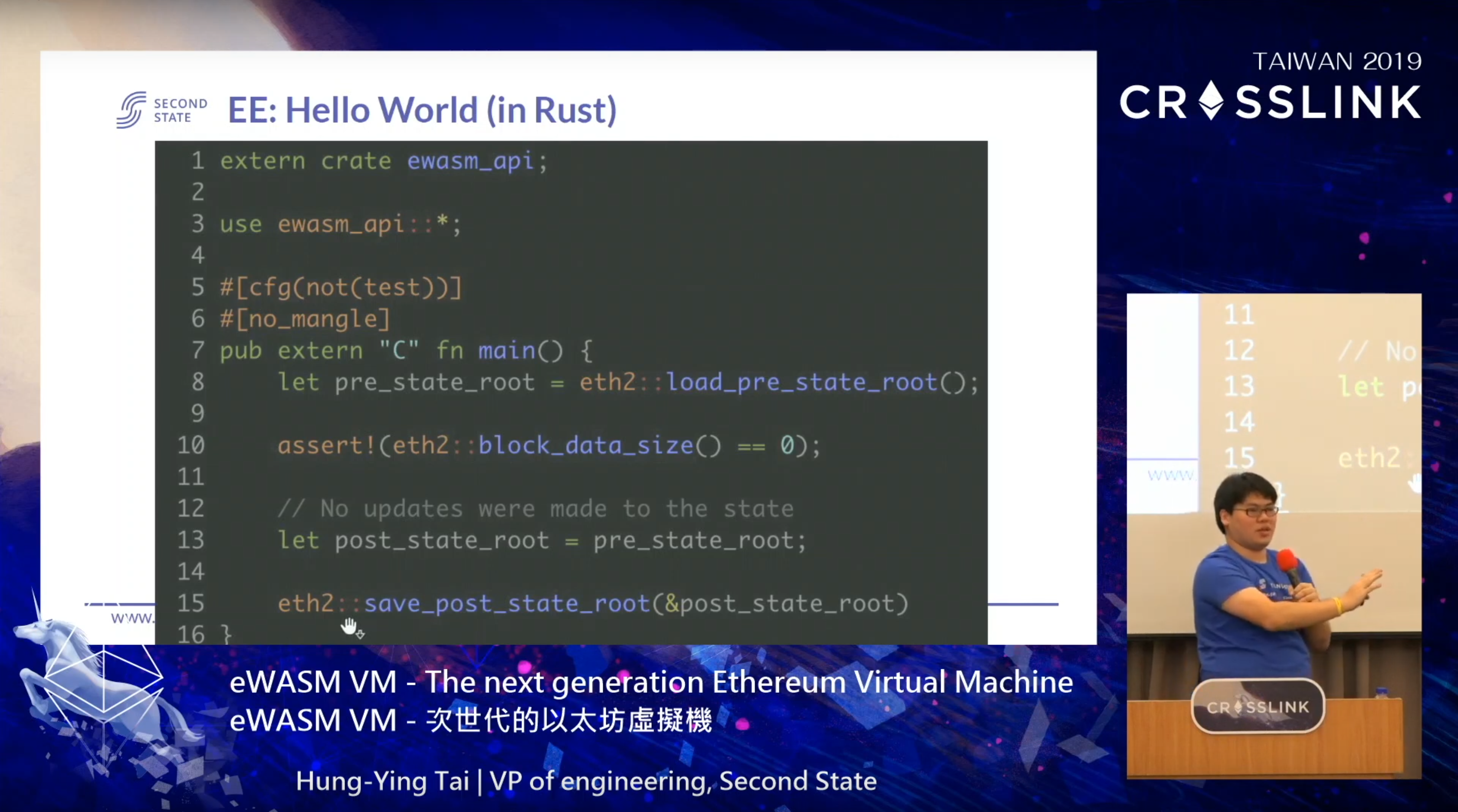 The above slide is Eth 2's Hello World EE. You can see that the first line in the main function reads the pre state root, then verify if the block data size is 0, and finally save the state root back. Eth 2's smart contract code are all in this form.

Ewasm 1.0 currently supports EVM 1 and most of the functions have a test net. Second state develops a compiler SOLL, which can compile solidity into Ewasm. Check it out if interested.

Ewasm 2.0 is still under study. The following slide is the direction of the research and contribution shared by the speaker. 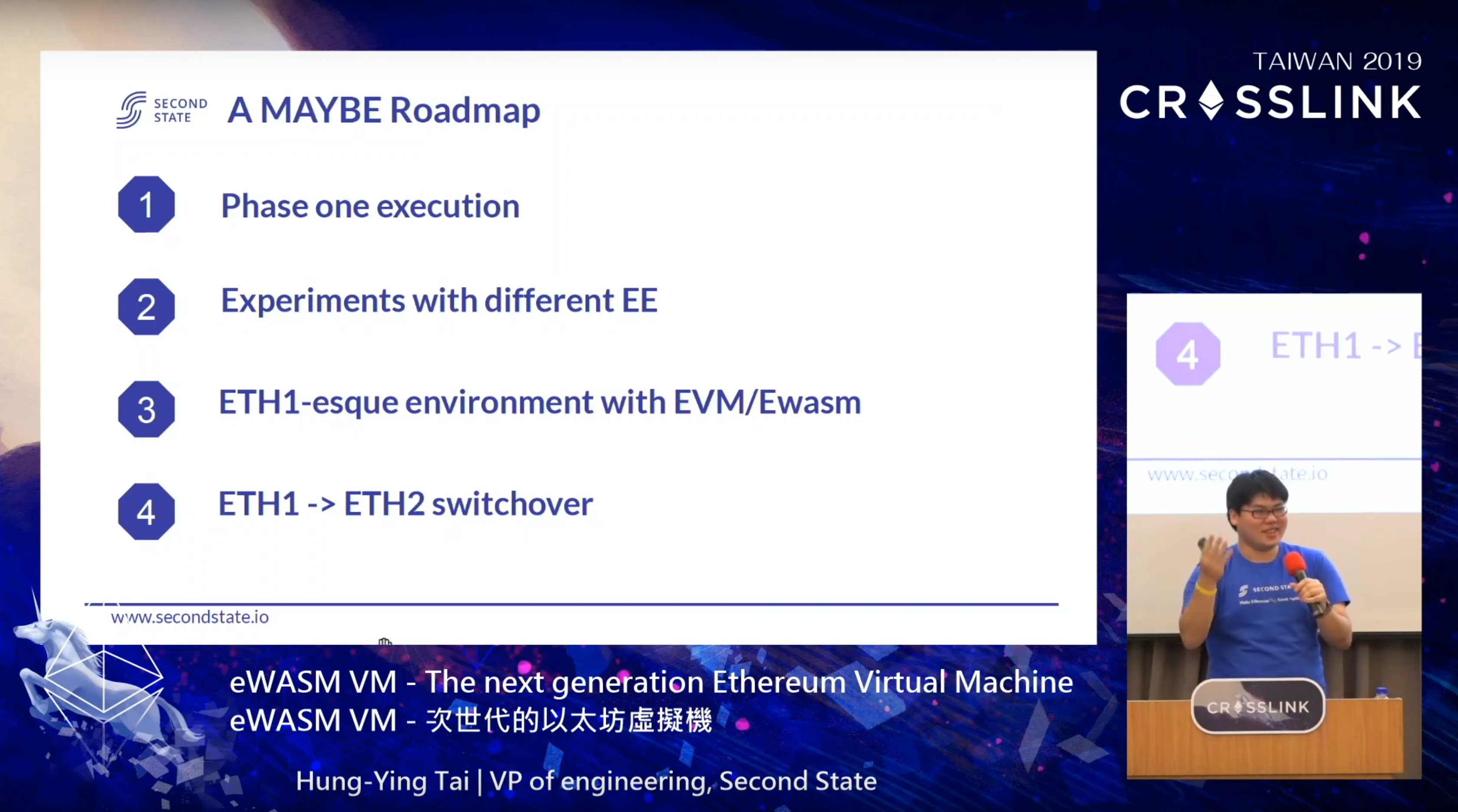