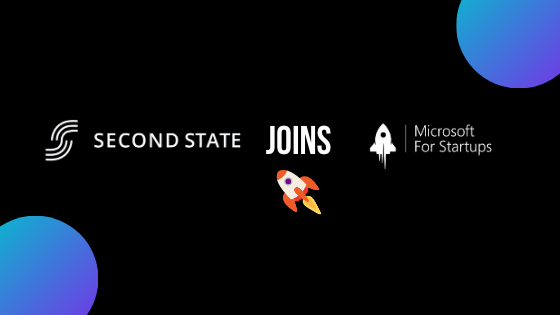 WebAssembly was originally created as a high-performance execution engine for web browsers. As it becomes increasingly popular in the developer community, WebAssembly is moving from the client-side to the server-side, powering the next generation cloud services.

The Second State Virtual Machine (SSVM) is a WebAssembly execution engine optimized for server-side applications. SSVM is highly performant and supports seamless integration from application frameworks, such as NodeJS. It also supports AI hardware extensions, and precise metering of resource consumption during execution. It can be used in AI inference, video image processing, big data analytics, and other application scenarios that demand performance and efficiency. It can also be used in cloud services, Internet platforms, blockchains, and other scenarios that require the safe execution sandbox for third-party code.

With the help of Microsoft for Startups, Second State will provide server-side WebAssembly services on the Azure cloud, contributing to the Azure cloud ecosystem.

In the area of decentralized cloud services, such as blockchains, SSVM is one of the major contributors to the next generation of Ethereum protocol. Recently, the Web3 Foundation funded Second State to bring the next-generation Ethereum Virtual machine and developer tools into the Polkadot ecosystem.

In addition, Second State has developed several SSVM based packages, including the SOLL compiler, funded by the Ethereum Foundation and ETC Labs; and a web-based IDE called BUIDL, it allows blockchain developers to create a complete DAPP within 5 minutes.

Microsoft for Startups, an exclusive program that provides qualified B2B startups with technology and business enablement resources, is a founders-first program. It is committed to the success of world's most innovative and entrepreneurial startups. Companies in the Microsoft for Startups program are on pace to close more than $1 billion in new sales over the next year.

Second State is based in Austin, Texas, USA, and has R&D Centers in Taipei, Beijing and Australia.