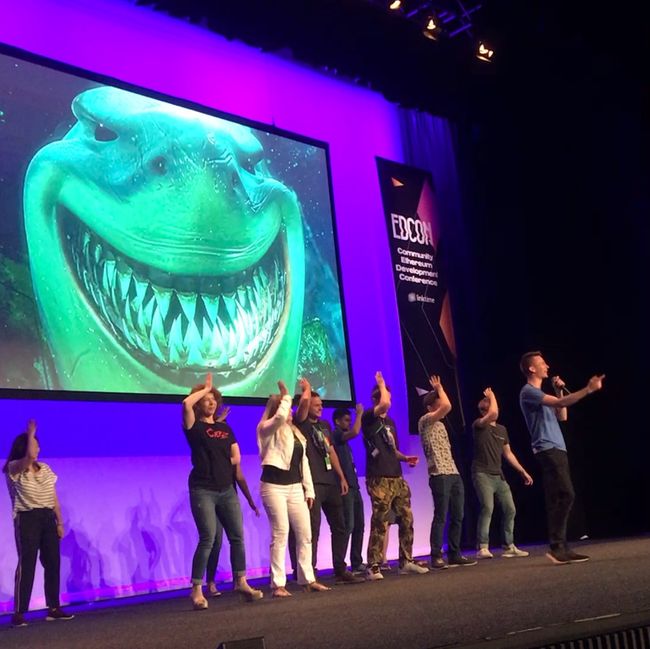 The upbeat and playful community atmosphere continued throughout the entire conference. The days were not only filled with conference presentations. They were filled with lively community interactions, the sharing of ideas, collaborative coding opportunities and even physical puzzle challenges. There was a constant buzz, and the Ethereum researchers and contributors walked the floor during the breaks; sharing conversations and enjoying the amazing conference catering.

After the initial opening performance Vitalik Buterin, who by now needed no further introduction, took to the stage with his contemplative presentation about correct-by-construction (Casper CBC). More specifically, how the Casper CBC family of consensus protocols would work in Ethereum 2.0.

One of the most interesting facts I discovered, during his talk, was that Casper CBC actually has no “in-protocol” fault tolerance threshold. Instead, safety is chosen on the client side. Essentially each Ethereum 2.0 client can nominate how they interact with the protocol by choosing their own time vs certainty requirements.

Here are a few more points which I also found very interesting:

These points are all part of a new school of safe-under-asynchrony BFT consensus which was originally invented by Vlad Zamfir.

The roles and responsibilities of an Ethereum 2.0 validator became more and more apparent as the presentations went on. For example, becoming a validator requires a deposit of 32ETH (deposited to the appropriate contract on the main Ethereum 1.0 chain). Once the 32 ETH has been confirmed, the validator begins their life on the beacon chain. The beacon chain, which is the system chain for Ethereum 2.0, is where validators live, where random numbers are generated, where deposits are held and where slashing occurs.

Once a validator is chosen (using pseudo random sampling) they serve on the beacon chain for approximately 2 weeks. These validators take on responsibilities to, amongst other things, propose valid Ethereum 2.0 blocks, create crosslinks (communications between sharded chains) and vote on correct cross shard links.

Of course no staking system would be complete without penalties. Validator penalties include, but are not limited to, general inactivity, attesting to incorrect data and/or falsely attesting to data which is not actually available. All of the presentations, at this conference, were more about the overarching technical architecture and as such, did not go into actual details about the profitability of being a validator. If you are interested in more of these details, the penalty and reward quotients section of the official Ethereum 2.0 specification provides concrete values as well as an annual reward percentage, based on a particular assumption.

Ethereum Core Researcher Hsiao-Wei Wang, gave an excellent presentation which essentially outlined “a day in the life of an Ethereum Beacon Chain Validator”. Danny Ryan provided a great explanation of how sharding and proof of stake come together into a single design to create Ethereum 2.0. Danny also provided a simple overview diagram which I have included below. 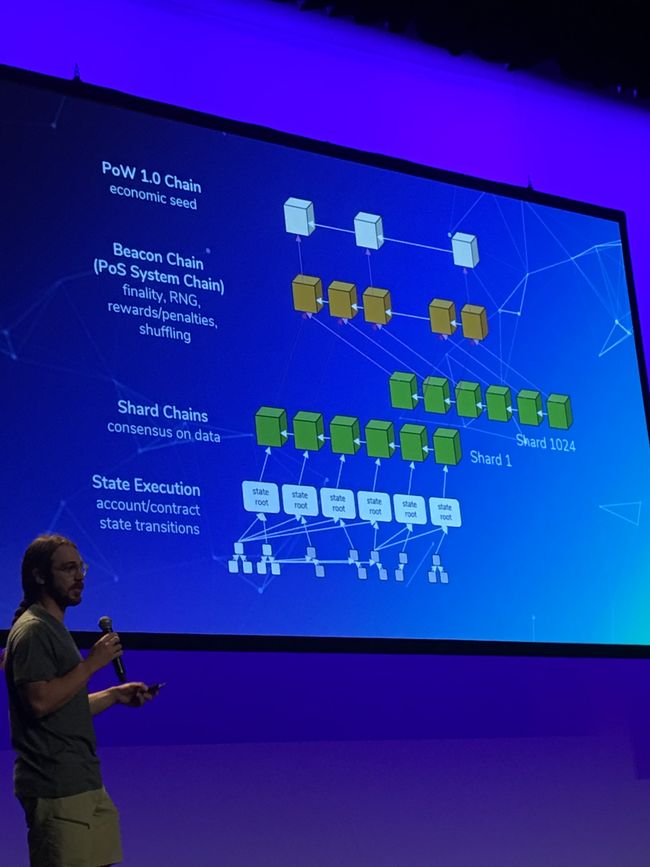 Most of the presentations also referenced the Ethereum 2.0 roadmap. Specifically, the talks referenced the first phase of Ethereum 2.0 (commonly known as Phase 0). At this stage the specifications of Ethereum 2.0 are concrete. The path forward is now focused primarily on engineering and development. Sights are set on releasing the core system level proof of stake chain (beacon chain pictured above) by the end of this year.

The Phase 0 implementation is scheduled for Q4 of 2019.

The reason for the phased implementation of Ethereum 2.0 is to allow developers, testers and the community to take a more conservative approach. For example Phase 0 implements the beacon chain but does not facilitate externally owned user accounts or any user activity whatsoever.

Similarly, Phase 1 (which will of course come after Phase 0) will introduce sharded chains, but with test data only. Again, no user accounts or user activity. It is expected that the Phase 2 implementation of Ethereum 2.0 will eventually add accounts, smart contracts and so forth.

Preston Van Loon, Co-founder & Tech lead at Prysmatic Labs, gave an excellent presentation entitled “How to Build a Production-ready Ethereum 2.0 Client”. Whilst it was originally thought that the existing Ethereum 1.0 clients could be updated/upgraded, developers have since learned that the Ethereum 2.0 clients have to be written from the ground up.

One of the upsides of this fresh approach, is that developers can now entertain completely new ideas without worrying about how they would have to integrate with existing Ethereum 1.0 clients.

One of the challenges which this brings however, is that eventually all of these different new clients will need to align from an interoperability standpoint.

Over 100 people, from all over the world, are currently contributing to the development of almost a dozen different Ethereum 2.0 clients

It was really great to see so many different projects presenting so many different ideas. The community engagement and collaboration was a good fit for Second State. There was an overriding focus on providing innovative blockchain solutions. Dr Yuan demonstrated how SecondState can achieve new heights, providing solutions which are performant, yet still safe and user friendly.

How about Ethereum 1.x?

It is clear that Ethereum 2.0 is still months (or maybe even years) away from being useful. However, that does not mean current Ethereum users and developers are stuck with outdated and slow technology for a long period of time. Many innovations for Ethereum 2.0 are coming to fruition in today's Ethereum blockchain. For example,

Our very own Dr. Yuan gave an engaging presentation which explained how Lity (an extension of Solidity) provides unprecedented features to blockchain programming. 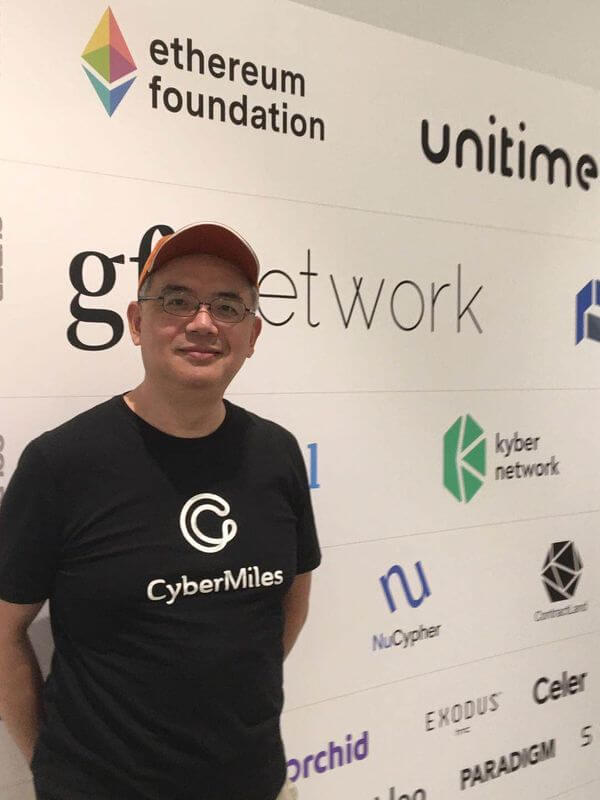 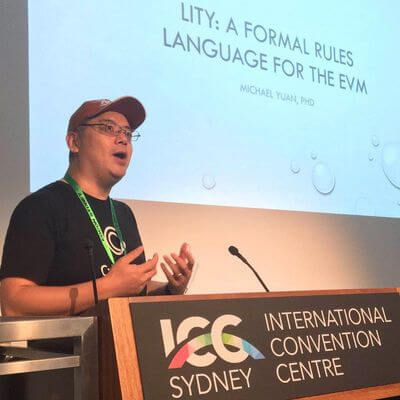 Smart contract code is rigid; once deployed the smart contract's logic is set in stone. Naturally, at the time of deployment only a finite set of possible conditions and logical outcomes are shipped. Many real world applications challenge this rigidity. Complex interactions require a more dynamic solution and this is where rules engines comes to the rescue.

Rules engines are already available in many “non-blockchain” enterprise programming languages and frameworks. For example the Drools, Jess and the Pega business rules platforms, to name a few. Rules engines already provide value to many industries including finance, commerce, travel and government. Dr Yuan cleverly introduced and then demonstrated with code, how rules engines can be used in the future of blockchain programming.

The rules engine provides modularity. This is an important feature because a large portion of business analysts who create the business logic, are not smart contract programmers. Modularity also allows for code re-usability as well as parallel development. The blockchain rules engine which Dr Yuan demonstrated, introduces a mechanism for business analysts to design and create rules without needing to write smart contract code. Dr Yuan walked the audience through a few real-world applications which helped explained the necessity for the rules engine to be a declarative language for non-programmers. 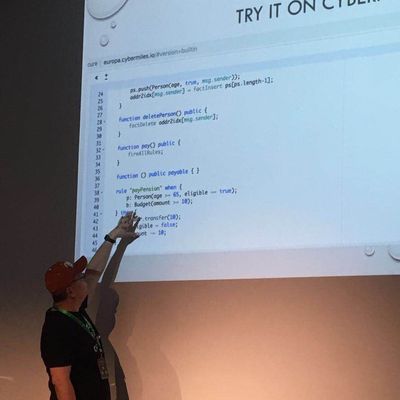 Dr Yuan gave many examples of the usefulness of rules engines. Perhaps the simplest to articulate, in this article, was the semi-complex fast food order in which, after some time, individual items on the menu begin to qualify as becoming part of a “combo”. Naturally, without the Rules Engine, the traditional smart contract code would be lengthy; difficult to write and comprehend. As you can see from the image below, the rules syntax is quite simple. 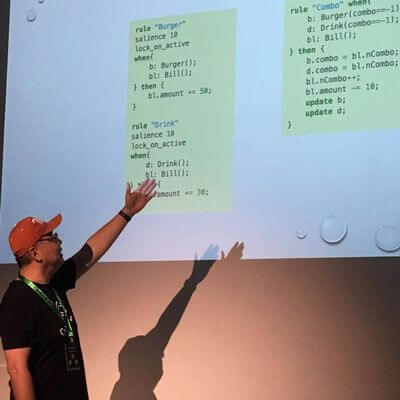 The rules engine provides a succinct solution (for non-programmers) which is easy to write, comprehend and maintain. The rules engine is robust. Once deployed, the rules engine employs the Rete algorithm; a pattern matching algorithm which is used to determine the correct order of rule execution.

I was fortunate enough to sit with Hayden Adams (the creator of Uniswap) and discuss one of my recent ideas. The idea is to store multiple values inside a single uint256 integer. 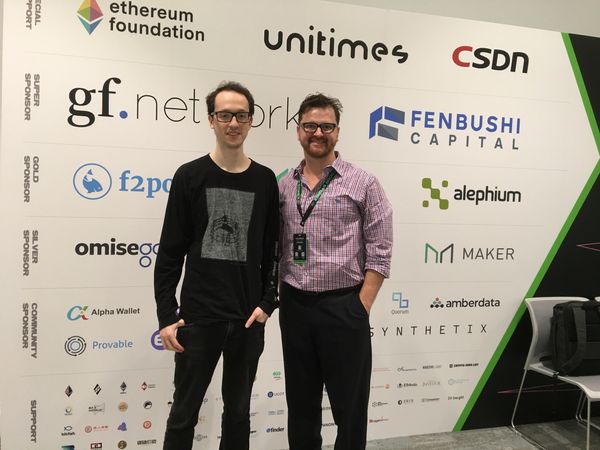 I also very briefly ran this idea past Vitalik, showing him my pseudo code during one of the breaks, and was pleased to hear that this pattern could be implemented in not just Solidity but also in Ethereum's Vyper programming language.

There was more than enough room at EDCON2019 for developers to sit down and code so I took a small window of opportunity to write and test the design in both Solidity and Vyper.

I am hopeful that this design may be useful for Uniswap version 2.0 and as such I will continue to research and develop the idea and its implementation in the very near future. The next step (as per Hayden's advice) is to research the gas efficiencies of this design.

There were so many amazing presenters, teams and projects at this conference. Just before we conclude, I would like to quickly mention a couple of projects as well as an idea; all of which I found inspirational and interesting.

Originally released in 2015, Embark is an Ethereum development framework which provides developers with the ability to create private blockchains, debug smart contracts and much more. From my understanding “Embark saves time”. Embark has a powerful CLI, a web UI dashboard, an explorer, its own code editor, and also integrates with decentralized services such as IPFS. Embark is a fully open source effort, created for developers, by developers.

The Ethereum Cat Herder project is an effort to provide decentralized project management support for a large collaboration like Ethereum. The speaker recalled early days of Ethereum when decisions are centralized and funds were spent carelessly, much like many crypto projects today. The evolution of Ethereum into a highly organized project with many conflicting stakeholders is testmony to the power of the community, and serves as a good example for other projects that follow it.

Virgil Griffith - Parametric insurance (insurance based on a measurable condition)

The Special Projects Lead at the Ethereum Foundation, Virgil Griffith, gave a great talk about decentralized insurance protocols and products. Virgil gave examples of how real-world outcomes could automatically invoke payment. One example was weather insurance whereby the purchaser of the insurance policy would automatically receive an insurance payout based on a simple metric such as wind speed. For example instant payouts are triggered when the wind speed registered by weather stations (in proximity to the insured property) exceed a threshold.

No insurance assessors and no delays.

Another example was that of flight delay insurance whereby a payout is issued based on how long the flight is delayed.

No paperwork, no waiting.

This particular talk made me revisit Dr Yuan's presentation about the blockchain Rules Engine. In his talk Dr Yuan gave the example of how the Rules Engine could resolve complex issues such as accounting for rewards in complex situations. For example a passenger achieving Gold frequent-flyer status shortly after take-off, but not soon enough to have redeemed the rewards for that particular flight.

I am imagining scores of real-world scenarios in the field of parametric (parameter based) insurance (and other parametric services); partly harvested crops, health insurance and much more. In my mind it boils down to the fact that Business analysts (and other professionals who create policies, models and contracts) work at a very high level of abstraction. On the other hand, blockchain developers and engineers work at an extremely niche level; writing and building decentralized infrastructure. The Rules Engine approach allows the high level business logic to seamlessly make its way into the decentralized application (DApp) layer.

All in all, EDCON2019 was a highly productive, yet friendly and relaxed community event.